Almost every water area comes to a stage when it is necessary to clean it. Either from bottom sediments or other kind of pollution or both. In cases the decision to remove the sediments and clean the area lies upon the governor of the water area. Sometimes the authorities are not sure how to carry out the cleaning in the most effective way. That is the main reason we decided to prepare several articles on the matter.

Step by step we will reveal the sequence of actions to be taken even prior to the very cleaning. Only after that we can proceed to the description of the cleaning process itself. First, we will elaborate on the pollution by sediment. How does it occure and what are the consequences of ignored sediment pollution?

Soil erosion is a natural process accelerated by human activities. Each year, erosion of surface soil from river basins amounts to 60 billion tons. As a result 24 billion tons of sediment flux to the oceans in the world. Furthermore, almost 25 billion tons of soil is lost from agricultural land. From a global point of view, this currently represents a redistribution of soil resources by about 7 % each decade. Certainly, this has multiple consequences.

Geologic erosion varies in different places on the earth’s surface. Variability is caused by differences in character of the minerals and of the climatic and vegetative conditions. The control over geologic erosion is often difficult to achieve. This is because the natural conditions that have prevailed over centuries cannot be hanged significantly to effect any great reductions in erosion. Under certain local conditions, however, improvements can be made to reduce erosion.

It is not uncommon that erosion rates have increased by more than 100 times that of the geological erosion. Agricultural activities, urbanization, road and highway construction, mining operations, and altering runoff conditions and river control works are the ones that induce accelerated erosion.

Water can wash sediment, such as gravel or pebbles, down from a creek, into a river. Sediments eventually end up in the river’s delta. Deltas, river banks, dams, and the bottom of waterfalls are common areas where sediment accumulates. People build reservoirs for many purposes, including flood control, water supply (for agriculture, industry, and urban usage), power generation, navigation and recreation, etc. As rivers carry sediment load, whether in large or small amounts, reservoir sedimentation occurs simultaneously with the impounding of water. Making full use of the benefits of reservoirs and developing appropriate measures to mitigate the side effects of dam construction are a necessity for the sustainable development of reservoirs. Many reservoirs have been filling with sediment, which depletes their storage capacity, and many have already exceeded their life expectancy. 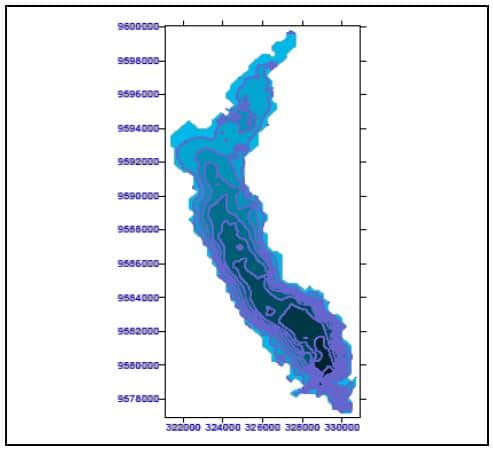 There are three basic methods of sediment control for reservoirs:

The rate at which reservoirs lose capacity due to sedimentation is generally expressed as a percentage of initial storage capacity lost per year. The problem of reservoir sedimentation has been, and will continue to be, underestimated for the majority of reservoir schemes. As stated in an article of The International Journal on Hydro Power and Dams concerning the sustainability of dams:

“Existing reservoirs lose 0.5 to 1.0 percent of their storage yearly and are on average already 35 years old; the best dam sites have already been used and the yearly increase of storage does not and will not balance the yearly loss by sedimentation.”

The chart below shows yearly sedimentation rates of selected countries.

That said we may very well declare, that pollution by sediment influences water areas all over the world, somewhere more, somewhere less so. When the matter is not handled properly, the pollution by sediment may block the navigation in rivers, meaning the waterway depth decreases so much it becomes unnavigable and the floods in these areas may have devastating impact on the surrounding environment. With the reservoirs and lakes, it is mostly limitation of their economical, recreational and other utilizations.